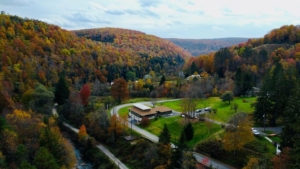 The Division of Highway’s proposed final route for the Corridor H Highway is the so-called “Canyon Route” between Parsons and Davis which would construct a massive concrete overpass with numerous exit ramps between the historic towns of Davis and Thomas. It would cross over the North Fork of the Blackwater Canyon, be visible from Pendleton Point at Blackwater Falls, and would degrade the natural beauty and historic sites there.  We support the Friends of Blackwater, over fifty business owners in the area, and over two thousand citizens who champion the alternate “Northern Route”, north of Thomas.  The comment period deadline is December 12, 2022.

We urge your support, voice, and donation to the “Go North” project by using this link on the Friends of Blackwater website:

This controversy also has the attention of The Washington Post: https://www.washingtonpost.com/transportation/2022/10/09/west-virginia-corridor-h-blackwater-falls/